Hotels always recover from economic downturns, right? Wrong. While it is true the U.S. hotel industry, in aggregate, has always rebounded from past recessions, this trend masks the fact that each cycle has winners and losers. Many hotels never recover. The U.S. hotel industry, on whole, has set new records for total revenue and ADR[1] in each historical economic cycle since this data has been collected[2]. The following figure illustrates this upward trend, showing aggregate U.S. hotel ADRs achieving new peaks in each of the past five economic cycles.

Data for all figures shown in this article are attributed to STR. 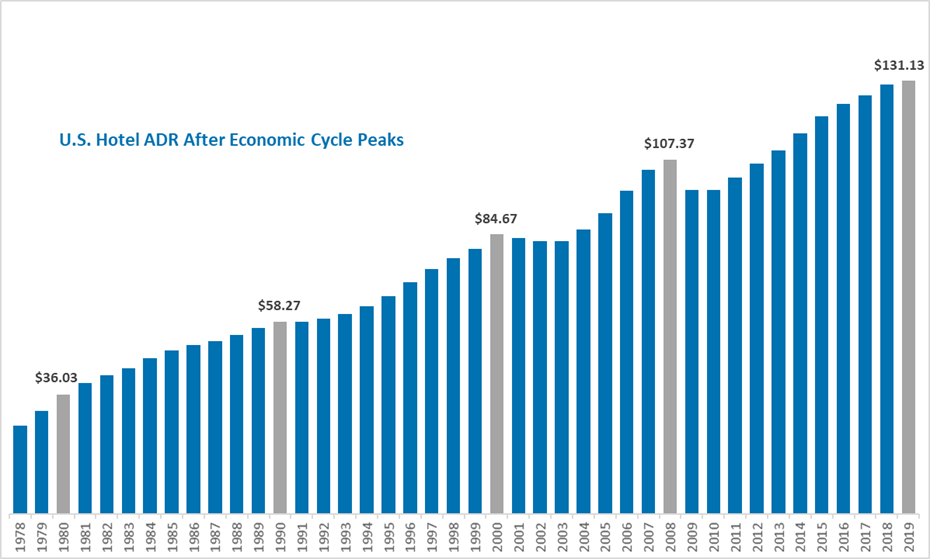 However, many individual hotels never recover after a recession. During the past economic cycle, approximately 1 in 10 U.S. hotels never rebounded to the ADR levels they achieved in 2008. During the Great Recession of 2009, aggregate ADRs declined significantly in the U.S. But by 2013, the industry had achieved a new ADR peak. But this recovery in aggregate performance obscures the fact that approximately 10 percent of U.S. hotels never recovered to their prior ADR peaks, even by 2019. We expect a similar outcome following the current pandemic and economic recession of 2020.

Hotel Appraisers & Advisors (HA&A) collaborated with STR to evaluate 7,530 U.S. hotels that maintained the same brand and chain scale during the U.S. economic cycle spanning from the 2008 peak through the subsequent peak in 2019. Of this sample, 6,785 hotels recovered to their nominal 2008 ADR peak levels by 2019. However, 745 hotels in our sample never got back to their peak ADR levels, even in nominal[3] dollars.

The failure of some hotels to recover during the past economic cycle was not limited to any single region. All regions of the country had some hotels that never recovered. The following figure shows a map of where the non-recovered hotels are located throughout the U.S. In this map, darker shades of green indicate market areas with higher percentages of hotels[4] that did not recover during the past economic cycle. 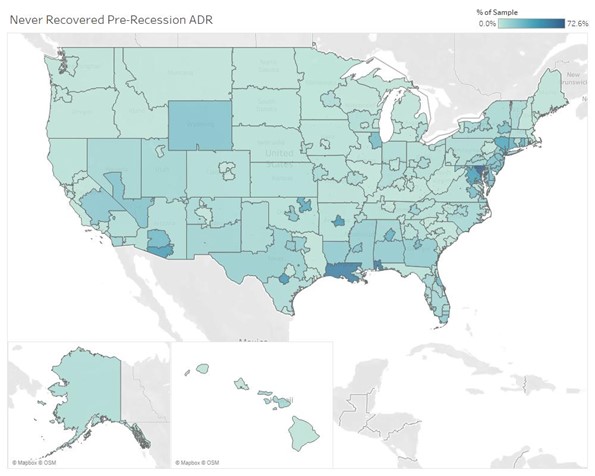 All regions of the U.S. have hotels that failed to recover. During the past cycle, some market areas such as Baltimore, New Orleans, Tucson, and San Antonio had relatively higher instances of hotels that did not recover. Several factors including business relocations, natural disasters, sociopolitical instability, and supply growth may have contributed to these performance trends.

A hotel’s specific location within a market can also have a significant effect on whether it recovers from an economic downturn. Suburban locations appear to be, by far, the riskiest type of hotel location in terms of business cycle risk. Out of six location categories we observed, the suburban location type accounted for more than half of all the hotels that never recovered to their prior ADR peaks. All five remaining location categories, combined, accounted for the remaining 46 percent of non-recovered hotels. The following figure illustrates the distribution of these non-recovered hotels by location type. 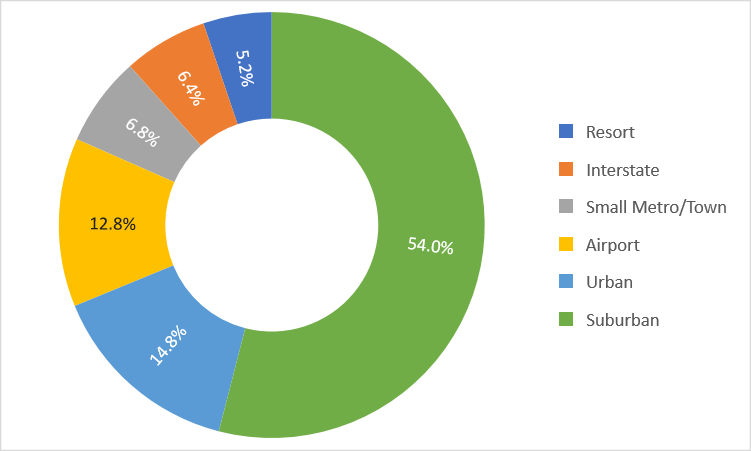 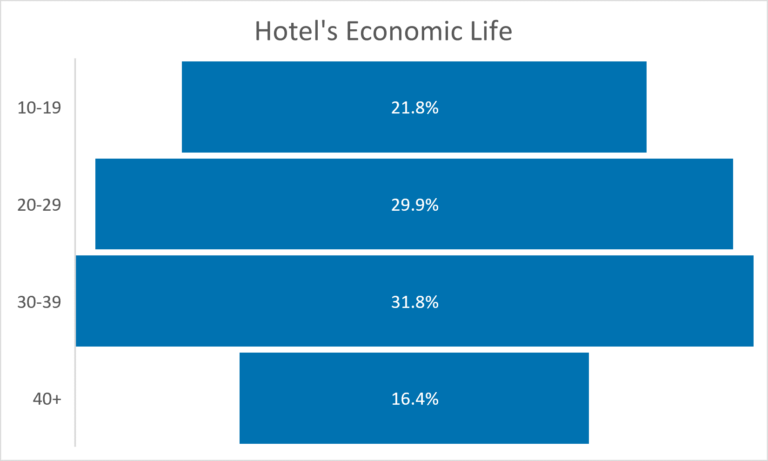 This data supports anecdotal evidence that many hotel owners renew their franchises after the initial 20-year terms, often for an additional 10-20 years. For example, suppose a hotel owner renews her Hampton Inn & Suites franchise agreement for an additional 20 years after an initial 20-year term. During the final 10 years of the extension, as the building approaches its 40th birthday, the owner may determine that getting another franchise extension will be unlikely or cost prohibitive, especially since the hotel is already over 30 years old and may feature some functional obsolescence. This owner may then decide to stop investing in the property beyond the bare minimum needed to meet brand standards. Such properties are nearing a period when they will likely “de-flag” to a lower chain scale, or independent brand. But even while benefiting from its original brand, performance may start declining as the property’s deferred maintenance and functional obsolescence make it increasingly less competitive in its market. While this example is hypothetical, it reflects the experience of many real hotels. It is also consistent with previously published data in which one of the authors estimated the median economic life of economy hotels in the United States was approximately 39 years.

The findings from this research support several conclusions relevant to hotel investors and appraisers.

In general, the U.S. hotel industry is robust and historically has always rebounded from any recession or shock to performance. Every cycle’s peak ADR has been surpassed by a new peak in the following business cycle. However, by definition, some individual hotels will not fare as well as the average hotel. Winners and losers emerge after each business cycle. The authors hope this article helps to illustrate some ways that industry participants can evaluate hotel investment risks.

[3] This number of non-recovered hotels would have been even greater if we had observed real dollars, factoring in inflation. For simplification, we focused on nominal dollars for this study.

[4] The percentage of non-recovered hotels is based on a sample of hotels in each market that only includes properties that were open for all of 2008 and 2019 and that also retained the same brand throughout this observation period.