In June of 1857 the U.S. economy entered its 30th consecutive month of expansion. But banks were already starting to feel the impact of bad loans piling up. As the gold rush slowed, the pace of migration westward across the country also slowed. Railroad stocks began to decline. Land speculators lost big when new railroad construction projects did not materialize as they had hoped. When international newspapers reported that the British government had circumvented rules pertaining to gold reserves, U.S. depositors wondered whether something like that could happen here. Banks came under increasing pressure to meet withdrawal requests for gold. Then, in August, a large shipment of gold headed for U.S. banks sank into the Pacific Ocean when the S.S. Central America steamship was hit by a hurricane. The next day, the Ohio Life Insurance and Trust Company suspended payments to depositors, eventually setting off a bank run and financial panic.

Looking back historically, the timing of the ensuing recession was not unusual. The average length of an economic expansion during the latter half of the 19th century was about 27 months. So, in hindsight, a recession may have been a few months overdue. Hindsight can make recessions look more predictable than they really were. But the cyclical nature of our economy is evident — no expansion or recession lasts forever. This article catalogues the duration of economic cycles in the U.S. and comments on historical trends in the duration of expansions and recessions.

Improvements in U.S. fiscal and monetary policy may have contributed to this fortunate trend. However, the timing of economic cycles remains highly variable and unpredictable. How much variance has occurred in the duration of economic cycles? How does the current economic expansion compare to prior cycles? To answer these questions, Hotel Appraisers & Advisors, LLC (HA&A)[1] evaluated data from the National Bureau of Economic Research (NBER).

The NBER has collects data on U.S. economic output, dating back to the mid-1850s. Since that time, the U.S. economy has experienced 34 business cycles. Each business cycle includes an expansion and a recession. HA&A measured the duration of each economic expansion and recession in the United States, over this historical period. We then plotted trend lines[2] to help visualize the change, over time, in the duration of expansions and recessions.

The 1857 expansion lasted only about 30 months. As of the end of March 2018, we have experienced 105 months of economic expansion. So, the duration of a typical economic expansion in the U.S. has generally gotten much longer, especially since the 1980s. But volatility also appears to have increased. The past five business cycles include both the longest (2001) and one of the shortest (1981) expansion cycles in history.

The following figure illustrates how many months each of the past 34 recessions lasted. The trend line shows how the duration of a typical recession has decreased over time. 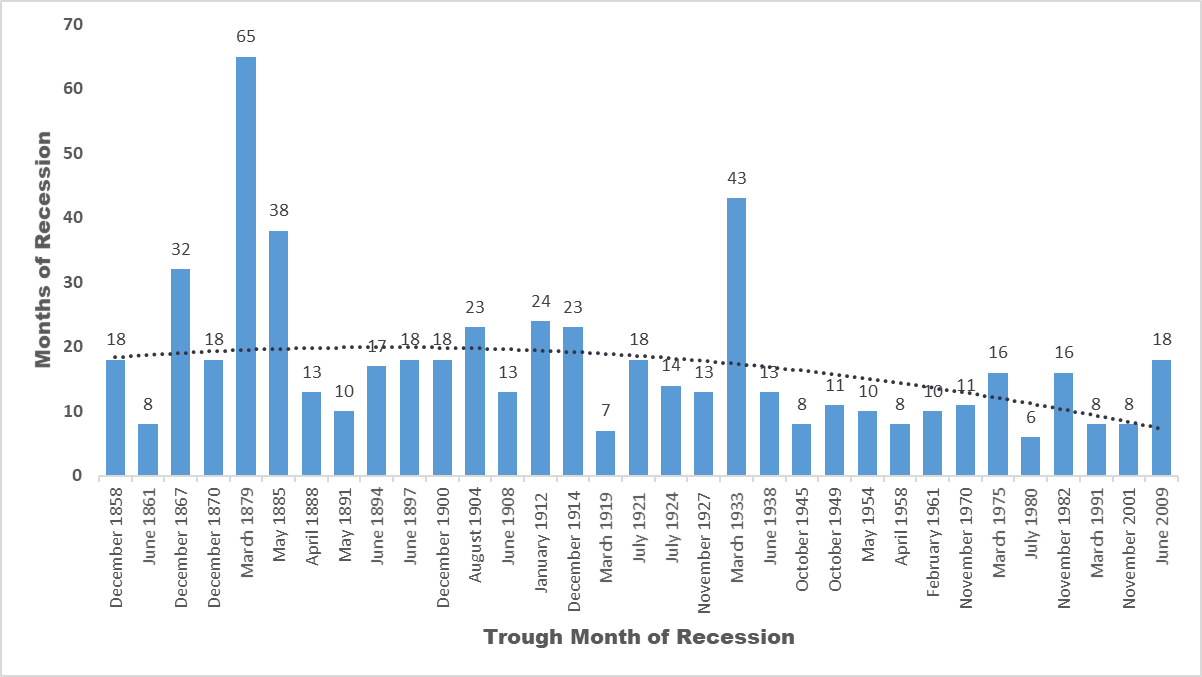 The 1858 recession lasted 18 months. At the time, it was not a particularly long recession. But by today’s standards it might qualify as severe. The “great recession” that ended in 2009 also lasted 18 months. As the trend line illustrates, a more typical duration for modern recessions is about 8 months. So, the duration of a typical economic recession in the U.S. has generally gotten shorter. However, there remains significant volatility in the duration of recessions in the U.S. The past five business cycles include recessions that range from 6 months to 18 months.

Economy on the Edge

Is this expansion living on borrowed time, or will it set new records? We cannot know for certain. Many of our clients, mainly hotel investors, are attempting to plan for either scenario. For some hotel owners, it may be a good time to sell off non-strategic assets. Similarly, for chains continuing to pursue “asset-light” strategies, it may be a good time to sell real estate holdings. For strategic buyers, especially those with relatively high overhead expenses, it may still be a good time to acquire hotel assets in strategic markets. But investors across the industry may be wise to develop contingency budgets and strategic plans for when the current expansion ends.

This report is intended for discussion purposes only and is not intended to be construed as investment advice.

[1] Hans Detlefsen, MPP, MAI is President of Hotel Appraisers & Advisors, LLC (HA&A). HA&A is a national consulting and advisory company focused exclusively on the hotel industry. The company is headquartered in Chicago, Illinois.

[2] We use second order, polynomial trend lines to help visualize changes in the duration of economic expansions and recessions. However, we conclude that the historical variance in cycle durations implies that these trend lines should not be used to predict cycle durations.