Since 2007, when Airbnb was created, the U.S. lodging industry has experienced a rapid increase in both traditional hotel demand and lodging demand occurring in the sharing economy. Airbnb has become a dominant channel for listing available lodging units in the sharing economy.[1] In this article, Hotel Appraisers & Advisors (HA&A) estimates Airbnb’s market share of U.S. lodging demand, measured by room nights booked. We also discuss historical growth rates and the recent deceleration of Airbnb’s demand growth pace.

HA&A collaborated with AirDNA[2] and relied on numerous other data providers, such as STR, Statista, Venturebeat, and other confidential sources, as well as our own proprietary estimation models, to develop the estimates shown in this report. Airbnb denied multiple requests to share data that would confirm various estimates shown throughout this report. Although we believe estimates in this report are accurate, they should not be relied on for investment decisions.

The following figure illustrates our estimate of Airbnb’s U.S. lodging demand growth from 2007 through 2017. 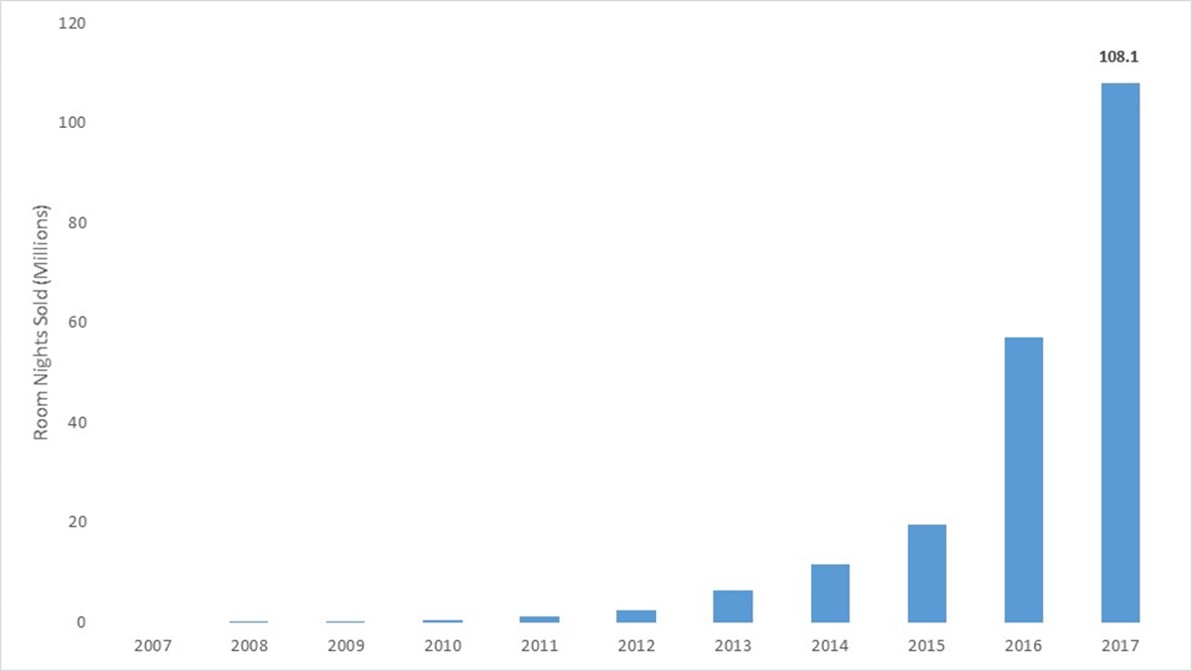 According to estimates from AirDNA, the total number of U.S. room nights booked through Airbnb in 2017 was approximately 108.1 million. Demand has grown rapidly during the past few years. However, we expect demand growth will decelerate in the near term. Recent monthly data from AirDNA provides strong evidence that this is already happening. Specifically, the pace of growth in room nights sold has declined over the course of the past year, even though demand is still growing significantly. We expect the pace of demand growth will continue to decelerate during the next few years.

Growing at a Decelerating Rate

The following figure illustrates how the pace of Airbnb’s demand growth has decelerated in 2017 and 2018, after accelerating rapidly throughout much of 2015 and 2016.

Figure 2 – Airbnb Demand is Growing at a Decelerating Rate 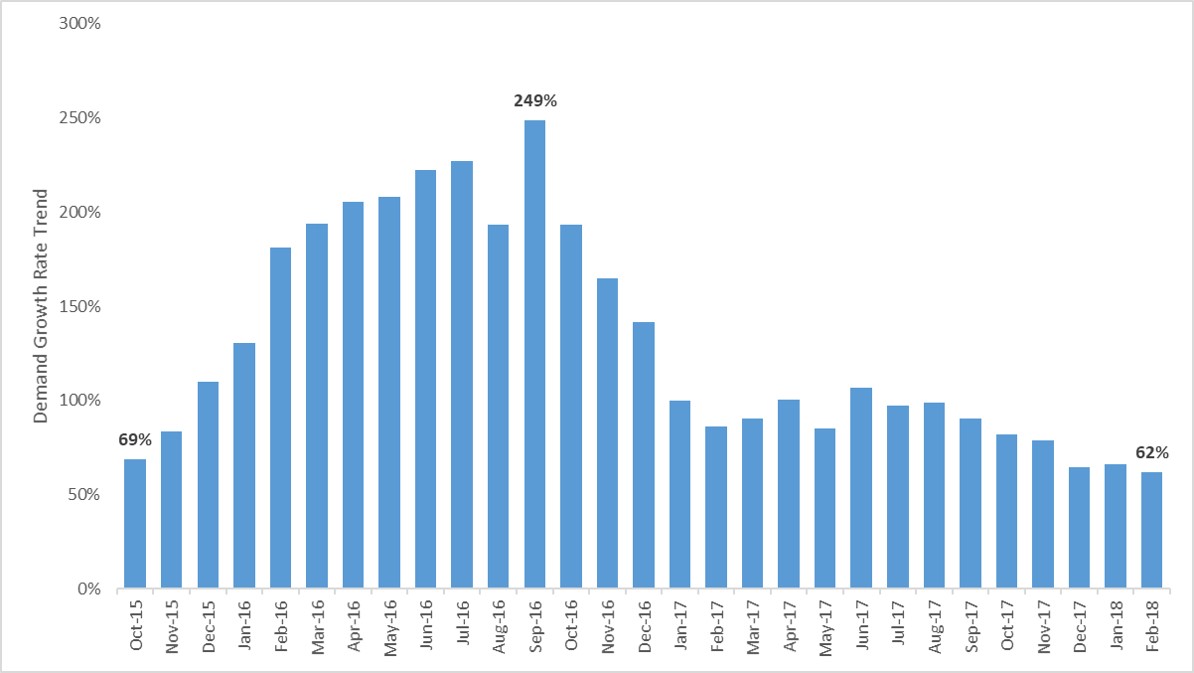 Airbnb’s rapid growth has made it a significant participant in the U.S. lodging industry. Its market share has grown from nothing to the high single-digits over the span of a decade. Based on recent growth trends, its market share of U.S. lodging demand is likely to increase further before stabilizing.

Based on our estimates, the following figure illustrates Airbnb’s share of room night bookings in the U.S. lodging market. 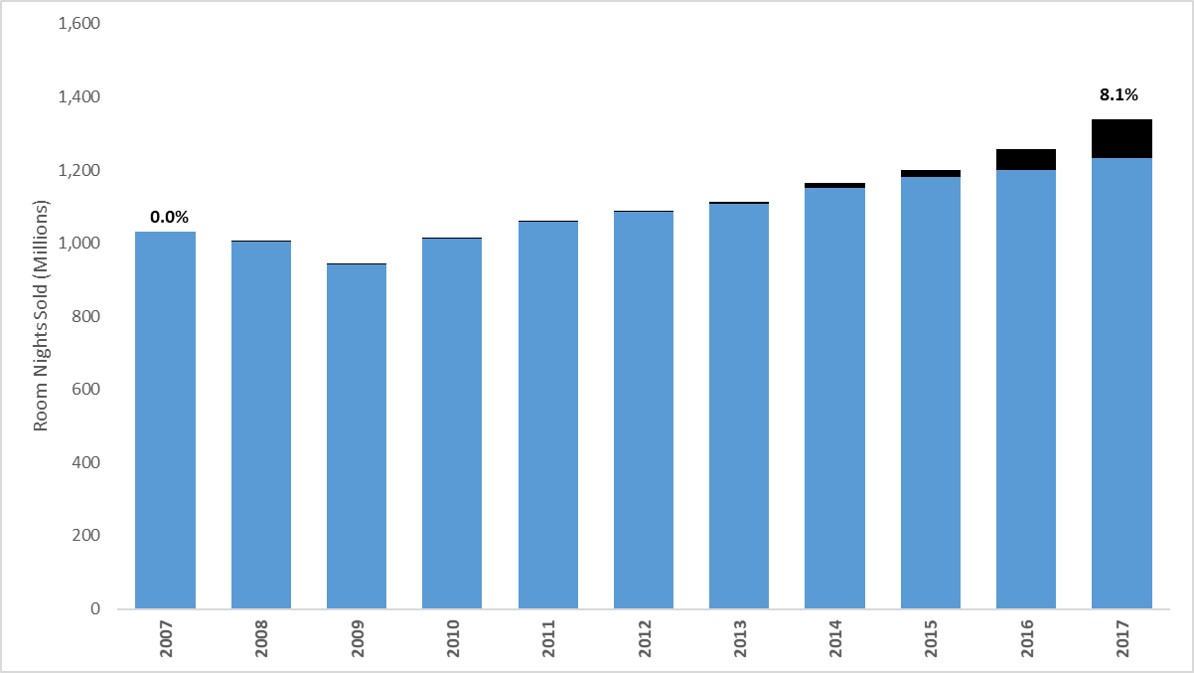 HA&A estimates that Airbnb accounted for approximately 8.1 percent of all paid U.S. lodging demand in 2017. Its market share has grown rapidly since its debut in 2007. We estimate its U.S. market share has increased from less than 1.0 percent to more than 8.0 percent during the past four years.

Several major hotel chains and lodging industry groups have communicated concern about Airbnb as a threat to hotel owners. However, the news is not all bad for investors in traditional hotels. If the peer-to-peer fee model proves itself as a long-term profit-maker, then we expect major hotel chains to acquire or develop similar platforms to offer their customers more lodging options in the sharing economy.[4] The large hotel companies should also benefit from the brand loyalty, sophisticated data tracking, and powerful reservation systems they have worked so hard to develop. These could represent long-term competitive advantages that the major hotel companies could leverage to cut into Airbnb’s market share during the next decade.

Many of the figures discussed throughout this article include estimates. This report is intended for discussion purposes only and is not intended to be construed as investment advice.

[2] AirDNA developed a proprietary methodology to estimate the number of room nights available and booked through Airbnb’s platform. The company offers local and national market data, available for purchase.

[3] Overall U.S. lodging demand grew by approximately 2.7 percent in 2017, according to data from STR.

[4] Hyatt has already moved in this direction with the recent acquisition of Oasis Collections.